Since NISCE's founding in 2008, we have been devoted to playing as many sports as possible, to the best of our abilities, for the glory of God. We have been primarily involved in basketball, soccer, volleyball, and chess.

Here you can find all you need to know about our game schedule, practice schedule, and Saint's Athletics news. This feed is updated as soon as there are changes made to the sports schedule, so you can be sure everything is up to date. You can filter the feed by sport with the filter options below. If you have any questions feel free to contact our Athletic Director, Pastor Brady at 815-343-0255 or bradenhamiel@yahoo.com.

*Due to lack of participation, we had to cancel all of our basketball games and official basketball practices for both boys and girls. Instead of an official season we will have two open gyms every week. Contact Pastor Hamiel if you have any questions!

Due to lack of participation, we had to cancel all of our basketball games and official basketball practices for both boys and girls. Instead of an official season we will have two open gyms every week.

On Thursday, March 11th, NISCE had its first chess tournament of 2021! Since COVID-19 hit last year many schools have dropped sporting competitions; therefore, NISCE chess club hasn't competed in a while. To spice some things up we chose to have a local competition just between NISCE students. Even some parents participated for fun against students who had a bye round.

First was the senior (Junior High) division which had four participants. This consisted of two champions from former years (Aaron Doyle and Justin Miller) and a humble third-grader, Isaiah Walters, whose advancing skill landed him a spot with the big boys. This year’s champion was Aaron Doyle who faced Alex Rax in the championship game.

The junior (elementary) division was slightly bigger with five participants. Several of these students have just learned the game this year. Although Dorothy Steele was the first contestant out of the double-round elimination tournament, she showed exceptional growth for a beginner. Michael Janko went undefeated until the semi-final round where he showed great sportsmanship and Christian character by giving up his chance at the finals to allow his opponent to proceed. The championship round was between Nevaeh Ventura and Wyatt Sheppard. Wyatt is the newest member of the chess club, who just learned the game and joining in January. Surprisingly, he became a fan favorite and went undefeated for a majority of the first half of the tournament. In the championship, each contestant won one game. That third and final game revealed Nevaeh Ventura as junior division champion!

NISCE hopes to hold another chess tournament before the end of the school year. Thank you to all participants, parents, grandparents, and spectators who attended!

Calling all chess players at NISCE! We are hosting a NISCE chess tournament between students and parents on March 11th, from 4:30 PM-6:00 PM. The students and parents will be in their own divisions until they have a winner who will win a prize. Then the winner of the two divisions will play for another prize.

The matches will take place in the auditorium where we ask all players and onlookers to remain as quiet as possible with phones silenced. Matches will be timed with each player having a total of 10 minutes to be completed. After each match, the players will receive their respective score that will determine who they play next. This will continue until there is a winner! Contact Pastor Jay (jaymiller@nisce.net) to register to play or to make any inquiries about the tournament.

Due to the lingering ice and snow, the first soccer practice has been postponed to Tuesday, March 8th, at 4pm. Thank you for your patience! Please see the current seasons module for the practice times moving forward.

Due to the abundance of snow, our first soccer practice will tentatively be on Tuesday’s March 2nd. Until then, the volleyball practice will still be beginning next week. Please refer to the current season module for information about practice times.

Basketball Season is Officially Over- No Thursday Scrimmage

NISCE Saints will transition from their Winter Basketball season to the Spring Girls Volleyball and Boys Soccer in the third week of February. Here are the details:

(Note that all of the following volleyball and basketball practices and scrimmages will be at Shooting Park Road Baptist Church, 4281 Shooting Park Rd, Peru, IL 61354 )

Friday 2/19: No Practice for any sport (school field trip)

Normal Spring Soccer and Volleyball Schedule (starting after the Third Week of Feb):

When: 5:00PM / Feb. 11th, 2021 Pastor Hamiel would like the team to drive together to the game leaving the school at 3:00PM. We can plan on going to dinner together after the game. The boys playing can ride home with their parents.

COVID-19 Regulations @ Calvary Baptist: Family and fans can go watch. But please plan sitting together as families. Temperatures will be taken at the entrance of the building and face masks are at your own choice during the game, but suggested to and from the gym while going through their building.

Details: The boys playing need to plan on wearing dark blue or black b-ball clothes for this game. The opposing team may have away jerseys for our team. Players should bring water to drink for the game.

Our top five competing chess players (and a few more who tagged along for fun) went to face off against Faith Bible Christian Academy (FBCA) on March 2nd. It was a long three hour trip down to Rosamond, IL. Our 2nd - 5th graders faced off against their 8th - 9th graders (their youngest players). Although challenging, our kids showed no fear and were quite impressive. Several won a few victories over their older competitors, including Justin Miller and Micah Oberholz. Overall our school lost the traveling trophy with a score of 12-3, but our own Micah Oberholtz did take home a 3rd place ribbon!

We went home feeling great and had some amazing fellowship as we stopped in to the Christian owned buffet, The Bonanza Steakhouse, in Lincoln, IL. We are learning from our mistakes and very much look forwards to a rematch against FBCA!

Thank you FBCA and Mr. Caleb Wheeler for the opportunity to compete and have fellowship. 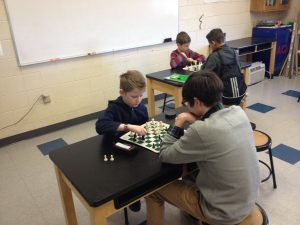 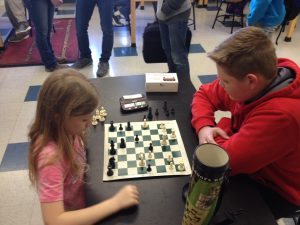 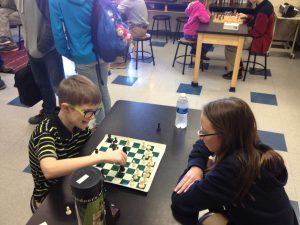 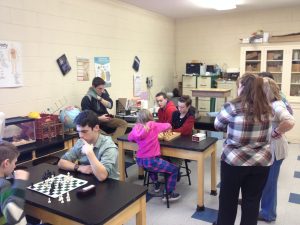 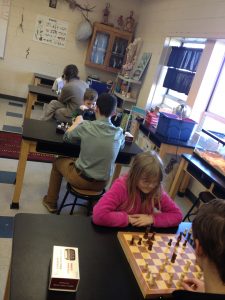 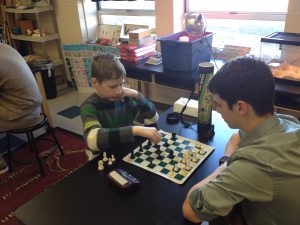 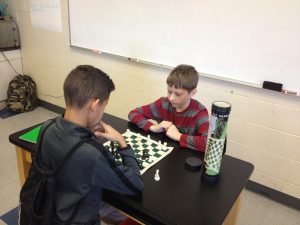 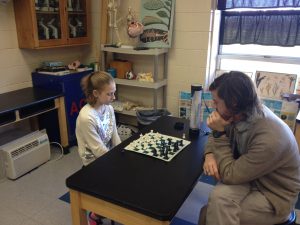